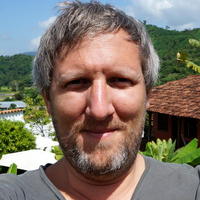 I hold a Ph.D. in Sociology (Université du Québec à Montréal, Quebec, Canada), an M.A. in Sociology (Université Libre de Bruxelles, Belgium) and a B.A. in the same discipline. Over the course of my studies, my research positions included research assistant, research professional and associate researcher. I conducted research at the Canada Research Chair in Globalization, Citizenship and Democracy, the Centre d’analyse de texte par ordinateur (centre for computer assisted text analysis), the Groupe de recherche en analyse du discours politique (political discourse analysis), the Centre urbanisation, culture et société-INRS (urbanization, culture and society), and the Collectif de recherche sur l’itinérance, la pauvreté et l’exclusion sociale (homelessness, poverty and social exclusion). I have been involved since 2002 in the development of SATO (automated text analysis system). I have also gained considerable experience in research methodology support, particularly through my work with various other projects and research groups in developing and analyzing textual and interview corpora. Since the summer of 2005, I have supervised several interuniversity student laboratories on community cultural activities. These experiences of coordinating ethnographic and sociology laboratories have provided me with a track record in mentoring and field work management.

I have studied sociology, political science, economics and management sciences in Europe, North America and Latin America. I completed two post-doctoral fellowships: one in sociology and globalization studies at the Institute on Globalization and the Human Condition at McMaster University (Hamilton, Ontario, Canada), funded by the Fonds québécois de la recherche sur la société et la culture (Quebec fund for research on society and culture), and the other in sociology at the Universidad Autonoma Metropolitana-Azcapotzalco (Mexico City), with financial support from the Mexican government. In addition to my studies at UQAM (Montreal) and the ULB (Brussels) in 2003-2004, I completed a research internship and economics courses at the Universidad de Buenos Aires (Argentine). In 2003, I studied political science and conducted doctoral research at the New School (New York).

The latter two opportunities were made possible through the support of bursaries from the Quebec Ministry of Education as well as my department and the Faculty of Humanities at UQAM. In 2001-2002, I spent two years at the Master’s level in Management of Cultural Organizations and Art-related Businesses at the École des Hautes Études Commerciales (Montreal). In 1995-1996, I studied management and systems computing at the Haute École de Bruxelles. From 1993 to 1995, I studied economics, social and political science and communications at the Facultés Universitaires Notre-Dame de la Paix de Namur (Belgium).

I was very active during the 1980s and 1990s in an environmental group working in public outreach to improve the accessibility of scientific knowledge on the relationships between flora and fauna (see: Jeunes et Nature). Working for ten years with advocacy groups shaped my social, political and ethical thinking, and striving to understand the ecological relationships among species and to present these complex scientific concepts to young people was to profoundly influence my approach to teaching.

During the 1990s, I acquired solid experience as a consultant in new information and communication technologies (NICT), working for Belgian, American, British and Japanese companies. I helped set up the now-defunct 1101 in Brussels, the first free internet café in Belgium. This work in new technologies provided an inside view of the progression from traditional production methods to what is now known as the knowledge-based economy. I was also very active as a web creator and designer during this period, setting up websites for clients in the world of theatre, fashion and music. I have designed numerous record jackets, book covers, posters and brochures.

I have maintained my active creative involvement in the artistic community, especially in media arts and electronic music. I am a member of the Association pour la Création et la Recherche Électroacoustiques du Québec (electroacoustic music) (see:ACREQ), which presents, among other activities, the International Digital Arts Biennial (see: BIAN). I am also a member of the artistic committee of the ELEKTRA Festival (see: ELEKTRA) and of the Board of Directors of the Coalition of New Canadians for Arts and Culture (see: CNCAC). I have given more than sixty workshops and sound performances in over fifteen countries (including Argentina, Brazil, Chile, China, Ecuador, Indonesia, Japan, Mexico, Uruguay, Peru and Singapore), and produced a half-dozen CDs and vinyl albums (see:Discogs and Wikipedia).

In 1998, I set up an independent record label, which allowed me to launch the work of numerous artists from Latin America, Asia, Europe and North America (see: Hushush, Archives.org, Discogs andWikipedia). This hands-on experience in the cultural arena has been a valued contribution to my university work. It has provided authentic professional experience that has offered in-depth, critical insight into « Southern » societies, thus balancing the more formal environment of my university research. In addition to being an intellectual and an artist, I am an avid sportsman. I hold a third-level (third-dan) black belt in kendo, Japanese competitive fencing.