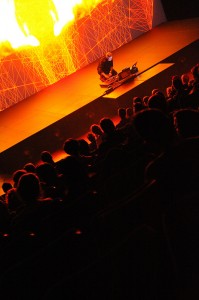 Under the pseudonym of Szkieve, Dimitri has presented about eighty performances and workshops in over twenty countries around the world (including Argentina, Brazil, Cambodia, Chile, China, Ecuador, Indonesia, Japan, Mexico, Myanmar, Uruguay, Peru, the Philippines, Singapore and Taiwan). Dimitri has released half-a-dozen CD’s and vinyl’s. In 1998, he has created an independent record label on which he released the sound of numerous artists from Latin America, Asia, Europe and North America (see: Hushush, Archives.org, Discogs and Wikipedia). Dimitri is also active in the new media scene and in photography.