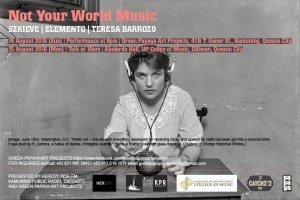 A specialist of critical international development studies and discourse analysis, he is currently studying expert discourses about the so-called problems of the Global South with a special emphasis on Latin America and South East Asia. He has published over thirty scientific articles and book chapters in four languages and has presented his work in over sixty conferences and seminars in more than ten countries.

Dr. della Faille is also an international performing artist. Since 1997, he has given performances, workshops and master classes in over 20 countries (such as Argentina, Brazil, Cambodia, Chile, China, Ecuador, Indonesia, Japan, Mexico, Myanmar, Peru, Philippines, Singapore, Taiwan, Uruguay and Vietnam). He has performed in a wide variety of alternative cultural venues, art galleries and more established festivals. Dimitri has released half a dozen solo CD, and about as many collaboration and split releases on CD and on vinyl. In 1998, he created the label Disques Hushush.

This talk and the performance it follows is presented by Heresy, WSK.FM, Kamuning Public Radio, UP College of Music, Catch272, and Green Papaya Art Projects