On January 8-10, 2015, I joined with hundreds of scholars who had converged to Singapore to attend to International Studies Assocation (ISA) Global South Caucus conference (http://www.isanet.org/Conferences/GSCISSingapore2015.aspx). The conference was held at the Singapore Management University. 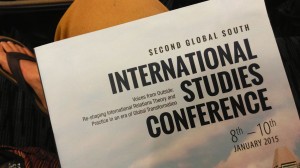 I presented a conference on my research about social statistics in the so-called developing world.

Abstract for my conference:

Taking the stance of the political sociology of the state in so-called developing countries and of a critical study of the international system, this paper will examine the production of social statistics in the “South”. It is acknowledged that surveys and census are still largely dominated by “Northern expertise”. However, my current research shows the emergence of projects that criticize this Northern hegemony –implicitly more often than not but sometimes explicitly. Based in part on my fieldwork in Africa, Central America and South East Asia as well as a literature review, in this paper would like to suggest that one has to see political activism in the production of social statistics. But it is a political activism that is being expressed in ways different than the more obvious multilateral political platforms often studied in international relations studies. This technocratic activism is mostly expressed through three elements:  1) criticism of international statistical comparisons, 2) the creation of regional or culturally specific statistics and 3) through the growing practice of technical South-South cooperation. As this paper will show, in spite of being promising avenues for challenging “Northern expertise”, this counter-hegemonic technocratic politics fails to assess larger issues. 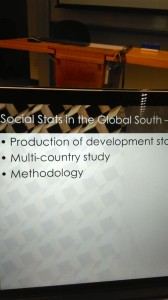 I have also been a discussant on a panel on the challenges of state-building.

Starting from the premise that state-building is always an ongoing process, this panel brings together papers that think through this non-uniform process of state-building. Papers provide nuanced insights that range from the ideational bases of decisions taken, the strategic implications of certain choices, to the effects of personalizing state policies. 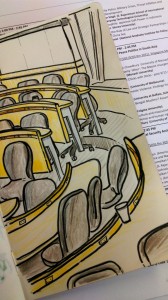